What a couple of weeks we have had in America. There is never a shortage of issues for us to debate about, but the aftermath of the Zimmerman trial has sparked discussions, rallies and disagreements of epic proportions.

Along with that we learn that one of America’s largest cities, and my hometown, Detroit has filed for bankruptcy. How does that happen in a superpower?

How does a jury of six mothers acquit a man who profiled and killed an unarmed teenager?

We have Stand Your Ground laws, the conflicting and confusing course of events which were detailed by the defendant along with eyewitness accounts, scant evidence and a verdict that has worked to divide a nation much like the O.J. trial did in 1994.

Back to Detroit. Upon hearing the bankruptcy news, I spoke to a friend and as I was recalling my time there, I remembered complaining to my mom about the deterioration of the downtown area when I was about 15 or so. Even then I knew something was wrong. Detroit at that time was starting to lose it’s aesthetic luster, but never in my dreams would I imagine the city would ever run out of money. We built cars there. We were The Motor City. Motown.

Looking for more perspective, I decided to watch the documentary Detropia, a 2012 film that takes the viewer on a painful journey of the city’s decline through the eyes of a young local poet and blogger, a UAW Union president and a retired teacher and operator of the Raven Lounge, a nightclub located in the shadow of an auto assembly plant.

It’s a gripping, gritty portrayal of a city and its ills and I found myself having flashbacks to my childhood while watching it. One of the more powerful quotes from the film comes from Tommy Stephens, owner of The Raven Lounge:

He was speaking about how other U.S. cities are starting to see a decline, one’s who may have in the past looked at Detroit with pity. This also brings me back to the Zimmerman trial.

A lot of people from many cultures, socio-economic backgrounds and races are upset by the not-guilty verdict. There are some though that say justice has been done. They believe Zimmerman had a right to be armed and bear down on a teen who allegedly attacked him first. Throw in those that feel race shouldn’t be considered a part of the mix and are upset because President Barack Obama has commented pre and post trial and you have a potential cocktail that is waiting to explode.

Before the trial when Zimmerman was allowed to go home and not be charged with a crime up until now, there has been a great uproar over this case. George Zimmerman, a white Hispanic. Trayvon Martin, a black teen. Zimmerman, 28 years of age. Martin, 17. Some believe Trayvon was profiled because he was black and wearing a hoodie, a garment that some criminals wear to conceal their head and face while they are commiting crimes. But Trayvon was just going to the store.

Some people are protesting because they are angry. Others are afraid. Scared that their children will be targeted like Trayvon, killed and their killer will be exonnerated due to lack of evidence and a whole host of other factors. Following someone isn’t illegal. But perhaps profiling someone should be. Even one of the jurors who decided that Zimmerman wasn’t guilty said that he should have stayed in his vehicle after reporting Trayvon as being suspicious. If people don’t speak out about their fear, sadness and anger about this case and lobby for change, what happened to Sabrina Fulton’s and Tracey Martin’s son could very well happen to someone else’s child.

Now for the the debates, arguments and insults that have resulted as a part of this case. It’s disheartening to see and read so much vitriol on both sides. In everyone’s attempt to present their side they are forgetting to be respectful and empathy toward parents who have lost their son is all but absent as some pick over Trayvon’s past and images that when presented in the wrong context show a troubled teen. I have seen the words thug, punk, drug dealer, and the N word leveled at a dead kid. There is even a popular author who is offering to purchase another gun for George Zimmerman.

We seem to be ready to battle each other at every turn these days. We are afraid of being hurt. George Zimmerman had witnessed break-ins in his neighborhood and wanted to protect it. The people who commited the crimes were black. He was on edge when he saw Trayvon. I don’t know what was in his heart that night, but I know what was in his holster and the decisions he made on that rainy evening led to him killing a teen who was doing nothing wrong.

Even online, we are armed and ready for attacks. Earlier as I was scanning my Twitter feed I saw a few tweets about Detroit and focused in on something from a comedian that I have enjoyed over the years. DL Hughley is known for biting commentary in his comedy so I wasn’t surprised to see he had something funny to say about Detroit’s current reality. Here is what took place between us: 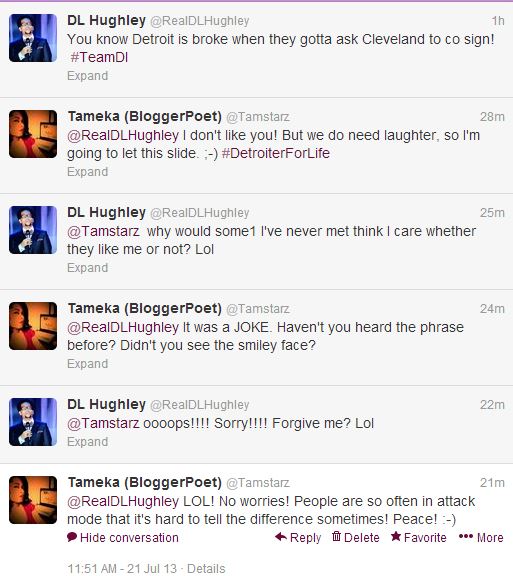 I have been on Twitter long enough to know that there are those that get up close and personal with celebrities all of the time and shower them with insults so I’m sure DL probably expected the same from me, but all I was doing was acknowledging his joke in my funny manner. Between people who are familiar with one another if one of them makes a joke or tells a truism about something that may tease the other we often say, “You know what, I don’t like you!” Then we break out in laughter and the conversation and teasing continues. When DL realized that I was just joking too, he apologized.

I so wish that we were more nurturing to one another on the whole. I wish that when we see a young man in a hoodie that we didn’t expect the worse. I wish that George Zimmerman had rolled his window down that night and said, “Hey what’s up neighbor? How are you doing tonight in all this rain? You okay?” How I wish that Detroit had not been run into the ground. I wish that more of our young men were surrounded by peace instead of pieces (guns).