Memorial Day weekend is here and as we honor our fallen military men and women, we will gather with family, visit final resting places, sing songs and send up private prayers for those we have lost in war. This United States federal holiday is also used to relax and get away and lots of people will use the time to escape by reading novels.

In a recent Facebook musing, I fantasized about some of my favorite authors (living and dead) writing a buddy book together. Of course we have writers who do this and do it well, (best friends Virgina DeBerry and Donna Grant, pictured above) husband and wife team Denene Millner and Nick Chiles and mother daughter duo Mary and Carol Higgins Clark), but I wanted to explore other literary duos who either had things in common that we don’t immediately think about, or those who were on opposite ends of the spectrum in their work and what it would be like if they paired up in prose.

The first pair that came to my mind was James Baldwin and E. Lynn Harris. As gay men, both writers were very forthcoming about their sexuality and wrote about it explicitly and eloquently. James’ writing because of the times he lived in, focused more on social and racial issues from a civil rights perspective and E. Lynn wrote in a more contemporary vein about men who were hiding their homosexuality and the impact their “down low” behavior had on the men and women they were involved with, their own psyches and society at large. To think both of these prolific men are gone shakes my soul. James Baldwin died at 63 of stomach cancer on December 1, 1987 and E. Lynn Harris reportedly succumbed to heart disease at age 54 on July 23, 2009. What wonderful stories they would have told together.

Moving along in my thought process, my heart palpitated with excitement when I thought about what a book written by poet Charles Bukowski and one of the first “street lit” authors Donald Goines would mean to the literary world. These men documented the darkness of our society and made it palatable due to their amazing writing ability. Charles, a raw and gifted poet, would punch readers in the gut with work about sex and low-life’s and then heal them with his poetic way with language. Donald, having lived the life of a drug addict and convict, created gritty worlds that no one wanted to inhabit themselves, but his authentic way of drawing readers in could not be denied. He was not what you would call “literary,” but what he lacked in polish, he made up for in passion. I’m sure the lines would have been very long at a Goines and Bukowski book signing. 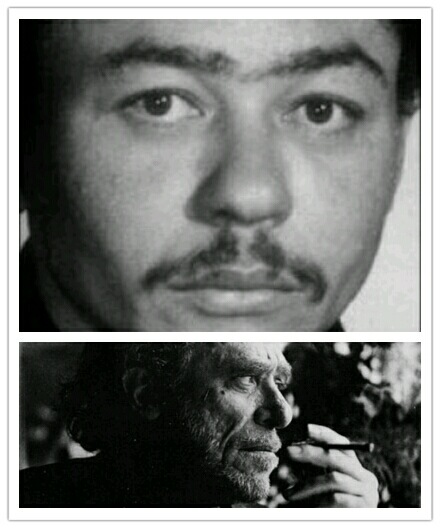 Not to leave the ladies out, can you imagine how wicked and playful a novel written by female sexuality experts Nancy Friday and Dr. Ruth Westheimer would be? I even came up with a title, Sensual Seniors. Truth moment, when I worked as a customer service rep at Barnes and Noble when I was in college, one of my favorite things to do was to browse the aisles and see which sections had the heaviest traffic and which books were the most popular. Hands down, the sexuality section always came out on top and Nancy Friday’s books were always the ones that customers loved to thumb through before they made their way to the cash registers. I’m sure a book by these two ladies would be very spicy and educational.

Thinking about mysteries and thrillers conjured up thoughts of Stephen King and Walter Mosley collaborating. I would most certainly plop down $24.95 for Devil in a Blue Dress Shirt Stained With Blood! I was almost giddy when I came up with that title. They are two of the most popular and impactful writers of our times and I’m sure a book penned by the two of them would hit #1 in record time.

When I polled my Facebook friends about their ideas, some very popular names kept popping up. Writer and bibliophile Jess Ann Goodman said she’d like to see Alice Walker team up with either Toni Morrison,  Jessie Redmon Fauset or Nella Larsen and playwright and author DeJuan Mason threw Zora Neale Hurston  into the mix. Gina Torres, blogger and political expert, also loves the idea of Alice Walker sharing her pen with Toni Morrison.

I would be in book heaven if any of the authors that are still able would partner up. How amazing would that be? So what about you?

Which of your beloved writers would you like to imagine or actually see pull off a buddy book? Share in the comments!