Lyric Fire: Tales From The Stage – My Six-Word Story – I Wasn’t Born, I Was Adopted

It’s been about a week and a half since the Smith Magazine Six-Word Story Show and I promised a full report so here goes! Smith Magazine encourages and challenges their readers to tell their life stories and sum up significant events in just six words. It’s not an easy feat at times, but it’s fascinating to see how much can be revealed in so few words. The online mag recently put on a live show that celebrated the impact and importance of family and I was selected to participate.

As you can see from the picture above, I actually won the Facebook contest with my six-word entry, I wasn’t born, I was adopted. I was hoping to have video of my reading, but there was a glitch so the best I could do is re-post my 4-minute back-story and set the scene for you.

Imagine a packed house at the 92nd Street Y (Tribeca location), a brightly lit stage with a huge screen with my name and six-word story projected onto it. I was one of eleven storytellers that night and was third on the bill. As I waited backstage in the greenroom, I spoke to the other performers and ran over my story in my head. I was a little nervous, but excited about the opportunity.

I was able to hear the other stories and sink into them somewhat before it was my turn. Then Larry Smith, founder of Smith Magazine, gave me a beautiful intro (I wish I had a copy of it!) and I walked slowly onto the stage and said:

Good evening. I stand before you tonight as a former member of the unborn society. Of course intellectually we know that we all were born from a maternal life force better known as mother. I know that now too as an adult, but as a child and product of the foster care and adoption systems, I often wondered, was I truly born? There certainly wasn’t any physical evidence to support that fact.

Contrary to biological reality, in my young mind, my life began at age five on a warm spring day in Detroit, Michigan. Having been hatched from an extraterrestrial egg, I now stood before a strange woman in a green and white polka dot pant suit. A robust man with kind eyes and a shy smile was with her and I was told that these would now be my NEW parents.

All of the things that most children have to prove and celebrate their births were nonexistent in my world. After arriving at my new home, there were no pictures of me and no remnants of my existence as a baby. No left over rattles, teethers or blankets with my initials stitched on them were to be found. All memories of me bonding with my biological mom and dad, bottle sucking, taking my first steps and being fawned over by adoring relatives were wiped away just like the memories of Men in Black secret agents after completing a mission. The absence of these things often made me feel Gaga-esque, without the meat dress of course, but like an alien nonetheless. To soothe my sadness, I created imaginary realities! I played out scenarios that made me the long lost child of Cliff and Claire Huxtable, I embellished stories about my adoptive family to make it seem like I was truly linked to them by blood and I escaped into fiction books. It was safer in that world because the stories were plotted out for me from A-Z. My mother often chided me for doing so much reading when I should have been out playing with other kids, but submerging into created lives helped me forget the missing pieces of mine.

But one never truly escapes for long when the world is watching. It seemed as if everyone around me knew I hadn’t been born either. Kids at school were always teasing me because I looked nothing like the polka dot lady. When I asked my mother why I didn’t look like her, she took my arm and made me stand close to her as we looked into the long circular mirror that hang on the wall of our dining room. The images reflected back to me were foreign and expressedly different, but she insisted that we were the same complexion and had similar features. I so wanted to believe her. She was so impassioned in her speech that I’m sure she wanted it to be true as well. I cried that night because I felt like I’d never know the truth about how I came to be. I loved my mother, but I knew her insistences were lies. Even if they were well intentioned.

My official induction into the unborn society came one day when my mom gave me a packet of papers. Before my eyes was a world of words that were stripped of meaning. It was my adoption history with all of the identifying information cut out. Paragraphs with dates and notes by social workers became a blur. The words to me meant nothing and proved nothing. They were meaningless without the people, memories and stories to make them real. Even to this day the birth certificate that I have is fake. But my connection to life was REALized when I searched for and found my biological mother 11-years- ago. Today I’m proud to say that I now hold the title of Birth Girl, but I will always be partial to extraterrestrial beings. Na-Nu Na-Nu! Good Night.

After I was done, I received my applause and went back to the greenroom and was met with smiles and support from the other writers and enjoyed the rest of the show. It was a wonderful night of story-telling and I was also able to make some good connections with other writers and bloggers.

All in a days work for a budding novelist in New York City. 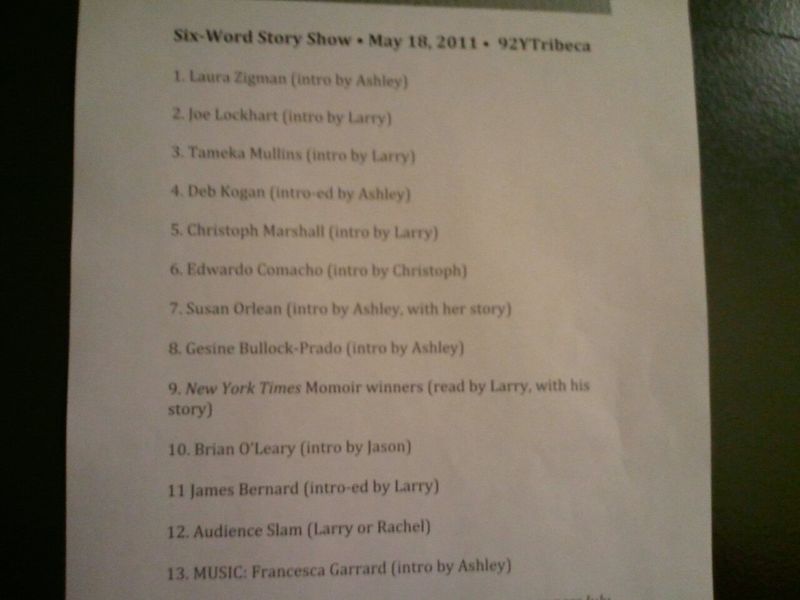