What a week! Whew! I am so happy that Friday is here. I’ve decided to select DENOUEMENT (PRONOUNCED: dā-ˌnü-ˈmäⁿ) as my favorite word for today. French in it’s origin, denouement is defined as being the outcome of a complex sequence of events, or the final outcome of the main dramatic complication in a literary work.

This word has been my “theme song” for many weeks as I’ve been battling to stay in my apartment where I have lived for the past 17 years. It got to the point where I was forced to leave for a short period and during that time I was sleeping on a good friend’s couch. In those moments I had to come to grips with the fact that I may not be able to move back home and that would have truly been an emotional ending for me. I of course would have loved to move into a new home, but the circumstances were not ideal so this ending would not have been on my terms.  Thankfully after many prayers, help from friends and relatives and hard work on my part to fix things, I was able to go home again. So all of the stress over the situation has now ended.

It was amazing to me that during this difficult period, I learned that a literary agent I queried was interested in reading a partial of my manuscript and I had won a poetry contest! My prize was that I would be able to read my poem (six-word memoir) in a live event as part of a line-up of uber talented writers and performers! Imagine being on the verge of losing almost everything you have and then being onstage following the former press secretary for President Clinton, Joe Lockhart in a poetry slam! Life is truly amazing isn’t it? That is an ending that I can live with for sure and I will feature more about my amazing night in an upcoming post.

There have also been some major denouement’s on the national world stage as well. Osama bin Laden’s reign of terror is now over, bringing hopefully some closure to the many families who lost loved ones in the September 11th attacks and other terrorist plots he and his followers had managed over the years.

On a much lighter note, due to the so-called changing demand of afternoon TV viewers some landmark soaps that we’ve grown to love over the years will be taken off of the air soon. How we’ll live without Erica Kane and Nikki Smith, I have no idea. All My Children and One Life to Live will certainly be missed won’t they?

It also seems that perhaps an end of an era in basketball may be in the works as the Boston Celtics and Los Angeles won’t be playing in the NBA Finals this year. It was mind boggling to see the Lakers get swept and my Celtics bounced from the playoffs in just the second round this year.

In probably one of the most storied endings in all of TV history, The Oprah Show will be a distant memory after May 25th, leaving afternoons a lot less interesting.

Endings are sometimes sad, cruel and bittersweet, but they are necessary in order for the next phase of growth to begin. I look forward to the next chapter in my own life, which I pray includes a career as a full-time author and speaker, the ending to terror and violence all over the world, the revival of my favorite soaps on cable, banner 18 for my beloved Celtics and a personal meeting with Oprah Winfrey herself on one of her new shows on OWN. A girl can dream of new beginnings in the midst of a denouement can’t she? 😉

SHARE YOUR STORY: Are there any endings that have blossomed into positive new beginnings for you? How did you transistion from the loss of one thing to learning to accept the newness in your life? 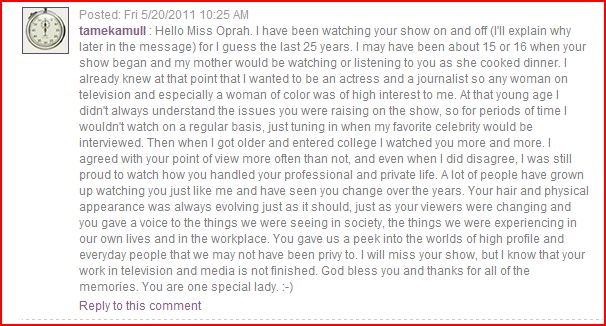