My Blog Lyric Fire: ‘The Game’ Redux: Can BET Lead the “Team” to a Championship?

Anticipation has been at an all-time high for new episodes of “The Game,” a show created in 2006 on the CW network which quietly built a cult following showcasing the life of a rookie football player (Pooch Hall as Derwin Davis) and his med-school student girlfriend, (Tia Mowry as Melanie Barnett) who get thrust into the celebrity lifestyle in San Diego, California.

The 2009 season three finale featured sports agent/manager Tasha Mack getting punched out by her love-scorned friend Kelly Pitts and love-birds Derwin and Melanie barely making it down the aisle after a string of relationship struggles and missteps by them both culminated in Derwin getting another woman pregnant. We gushed when they finally joined in unison with Derwin saying these beautiful words to Med School: “A while ago somebody asked me, How do you know when you’ve found the one? You know that you’ve found the one when you listen to the vows Melanie, it’s all there. Do you want to be with her for better and for worse, through sickness and in health til death til you part? If the answer is yes, I mean TRULY yes, then you know. With no hesitation and no reservations Melanie I know. Mel… I know.”

Then the CW network decided to cancel the show in it’s bid to do away with half-hour comedies amidst protests by fans, the actors and show’s producers. After a whirlwind of negotiations, The BET network decided to revive the show.

We see Derwin and Melanie basking in the glow of celebrity, Tasha taking on the task of managing Derwin’s career and also a younger man in the bedroom and Malik growing in arrogance as he beds the team owners wife and his former assistant Tee-Tee’s current flame. Jason and Kelly are at each others throats as she stars in a new reality series and lavishly spends money she’s received from the divorce settlement. Questions still swirl around whether Derwin is the father of little DJ, now two-years old and Melanie being Melanie swabs the child’s cheek with a Q-tip and ships it off to a lab for paternity testing. In the meantime, Brit-Brat, the daughter of Jason and Kelly has aged tremendously and taken on a new look!

Back at the ranch Melanie learns that DJ isn’t Derwin’s and tells him, breaking his heart. She then finds out the test was faulty and that Derwin actually IS the father! So now we’re left wondering if she’ll do the right thing and tell Derwin the truth. Oh so much drama! Well, this is what we were waiting for right?

Actually reviews of the first episode have been mixed due to the darkness of the show and irregular pacing. The original show was more billed as a comedy and was fueled by a laugh track. Last night’s episode featured a few laughs too, but the track was a bit off as well as some of the casting decisions.

Fans of the show took to Twitter (Pooch Hall, Tia Mowry and Hosea Chanchez were trending topics) and Facebook to express their opinions and they were quite lively. The consensus is that they want more of the original feel of the show but are mostly happy that their favorite cast mates are back. Actually it was reported last year that Brittany Daniel will only be featured in six of the 13 episodes that have been shot due to financial constraints. She was not present at any of the recent televised promotional events and was definitely missed by the fans. Almost one out of five people posting comments on The Game Facebook Fan Page were asking “Where’s Kelly Pitts?”

It would seem that with all of the buzz and fanfare that “The Game” can get back to it’s former glory. But BET has a major challenge on it’s hands as they try to breathe life back into an established show that already has a expectant following.

I’ll continue to weigh in as the season progresses and would like to know what your thoughts are. This is history in the making as it’s very rare that a cancelled show gets another chance and on another network. Let’s hope that the powers that be can iron out the wrinkles and make “The Game” a true come from behind world champion!

CLICK BELOW TO SEE COMPILATION SCENES FROM PAST SEASONS:

CLIP FROM SEASON FOUR EPISODE ONE

THE WAY THEY WERE: CW CAST PHOTO: 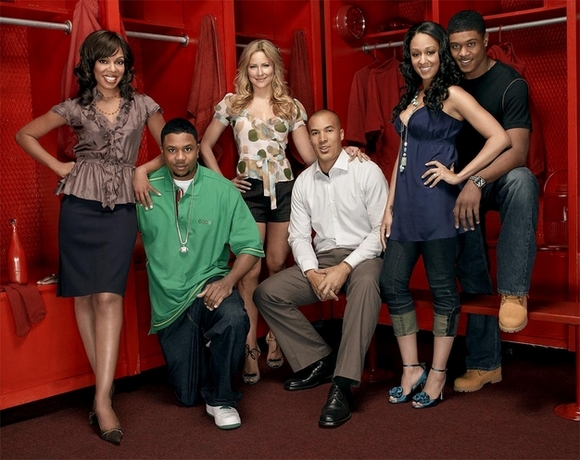